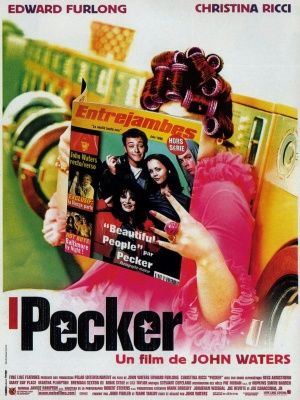 You’re crazy. You see art when there’s nothing there.

Pecker is open (main character unique ability) to the variety of life in and outside of Hampden, a district of Baltimore: “If it wasn’t for you, Peckerman, I’d never know this shit existed.”

To Pecker, “everything always look good” through the lens of his camera.

Pecker has taken pictures all over Baltimore for his first exhibit to be held at the fast-food joint where he works, The Sub Pit.

The fliers he has plastered around town (main character approach-doer) catch the eye of Rorey. She approaches (overall story catalyst) Pecker, checkbook in hand: “Your pictures are amazing. They’re the real thing. . . . I’d love to give you a show in my New York Gallery—if you’d be willing.”

At the opening, Pecker and his “culturally challenged family” are introduced to the New York art world that anoint him: “A brand new art star.” Pecker snaps pics of the chic crowd because: “Life is nothing if you’re not obsessed.”

The family returns to Hampden to find their home burglarized. Rorey encourages him to: “Take pictures, Pecker. This could be your next show. Your dad’s loss. Your mom’s sadness. Get close-ups.” As quickly as the community has embraced Pecker’s fame, they are ready to disown it—and him. The police officer investigating the case admonishes the boy: “What they call art up in New York young man, looks like just plain misery to me.” Shelley entreats him not to: “. . . become (consequence) an asshole, Pecker. I beg of you, do not become an asshole.”

All manners of catastrophes hit. Little Chrissy is put on Ritalin. Matt is caught shoplifting. Tina’s fired. Memama is accused of faking Mary’s miracle. Pecker can no longer take original photos: “I’m trying to get new stuff, but everyone knows me now.” As one potential snapshot subject snaps: “Some people don’t feel like being art.”

When Rorey puts the moves on Pecker (main character focus-temptation), an act witnessed by Shelley—it is the last straw for the photographer (main character response-conscience). Assuring Shelley he loves her “more than Kodak” (relationship story thematic counterpoint-commitment) he turns his back on New York and says: “They can come to me this time . . . I’m going to have my own show right here in Baltimore (mental sex-female).”

Shelley learns (overall story requirement) to appreciate the colors of her world (influence character resolve-change), and the town realizes its favorite son is true blue (main character resolve-steadfast). New York travels to Baltimore by limousine, and Pecker’s “outsider art” is a brilliant success (overall story outcome). All applause for Pecker and “the end of irony.” A newscaster inquires, “So what’s next, Pecker?” To which he replies, “Well. I’m thinking of directing a movie.” (main character concern-future)